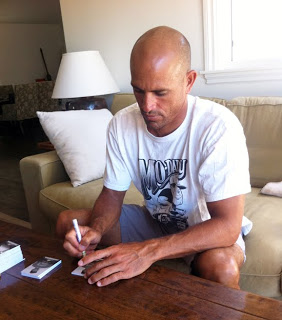 Just found this and thought it would be pretty cool to share. Since I was a huge baseball card collector when I was a kid these cards seriously perked my interest. Super cool honor for the eleven time champ. I have seen surfing trading cards in the past but they were always cheesy. Now that Upper Deck is involved the ante has been upped and these cards are going to be sick! Read below and see if you get as excited as me.

When it comes to trading cards, baseball has always been king. But things are changing as more and more collectors are looking for a trading card experience that features athletes who make their living off the diamond. Football, hockey, basketball, golf, MMA and even wrestling cards have all been popular, but now Upper Deck is excited to give sports fans a more extreme collecting option with surfing.Upper Deck has been targeting pro surfer Kelly Slater for some time and was thrilled when the company was able to strike an agreement for image rights and autographs for new sports cards. One of the key points to striking a deal occurred when Slater learned Upper Deck wanted to include him in the company’s2012 All-Time Greats product. This release has a checklist of only twenty athletes including iconic superstars like Michael Jordan, Wayne Gretzky, Tiger Woods, LeBron James, Dan Marino, Landon Donovan, Mike Tyson and Pete Rose to name a few. Kelly Slater will now be a part of that impressive checklist of superstars.Will Upper Deck add more surfers to the company’s product line up in the future? We’ll have to continue to asses how stoked the grommets, gremmies and locals are when they pull their Kelly Slater Upper Deck cards showing him ripping it up! Hopefully even the kooks like them. 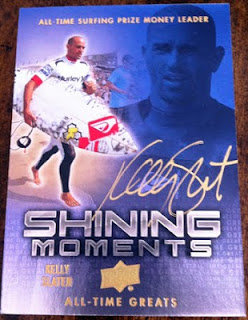 The “Shining Through” inserts in 2012 Upper Deck All-Time Greats includes some light f/x foil on the front which gives the card a very shiny look. 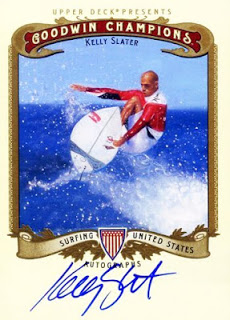 The Goodwin Champions line of cards is currently in the market and Kelly’s autograph cards in the set are selling in the $50-$75 range in the secondary market so there seems to be significant interest in them. It will be interesting to see how a more premium signed trading card of Slater’s sell when 2012 Upper Deck All-Time Greats releases this winter.
This website uses cookies to improve your experience. We'll assume you're ok with this, but you can opt-out if you wish. Cookie settingsACCEPT
Privacy & Cookies Policy