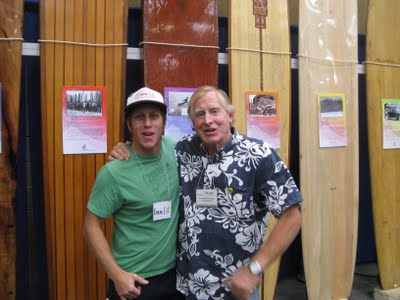 We lost a a great member of the Harbour Surfboards extended family this past Saturday Feb 6th. I was lucky enough to meet Mike Marshall back in the early Eighties while I was starting my stint as an employee at the Harbour Shop. Mike would often stop in and heckle us guys in the back. He was one of Rich’s original production shapers back in the sixties. One of my fondest memories of Mike was from the Harbour Surfboards 25th Anniversary party back in 1987. He was just the life of the party amongst the many surf characters from the Sixties and Seventies eras. It was always a pleasure to run into Mike and Sharon at various events and talk shop, I think he especially enjoyed talking education with my wife (she’s a high school teacher) since he was a long time teacher himself.

It sounds like Mike’s last days were as pleasant as can be expected. Here’s what Rich Harbour emailed me:

As many already know Mike Marshall, my dear friend of more than four and half decades, had a stroke early Monday morning. After arriving at
emergency, they found he had a very aggressive form of leukemia.
Brain surgery was performed to relieve pressure and he remained in an unconscious state thereafter.
Later in the week the family was informed that he was not going to survive, so they decided to remove him from all life support and take him home to live his final days where he was most comfortable.
He was transported by ambulance Thursday, and on the way to his home they convinced the ambulance driver to take a lap around the parking lot at Blackies. With that done, they delivered him to his house where he rested in the “Museum Room” on a hospital bed, now in a Blackie’s T-shirt in place of a hospital gown – much more appropriate. I visited Friday and Saturday. There were family and friends near him, all in a very positive mood, prepared for the final moments of his life that ended shortly after I left yesterday.
I wish his wife Sharon and family well. These are going to be tough times and my heart and thoughts are with them.
May he rest in peace.

Best wishes to Sharon and his family from the Harbour Surfboards extended family.